Disclaimer:  All Disney photos featured in this post belong and are copyrighted to Disney Photo Imaging.

I had an opportunity to have my own Disneyland Super Special Photo Shoot with the Signature Photo Experience at Disneyland on a recent trip to Los Angeles.  My family and I are huge Disney fans, but I had never heard about this service.  If you want to learn more about it, read on!

The Signature Photo at Disneyland is a private photo session with Disney photographers, either before the park opens in Mickey’s Toontown or after the park closes in California Adventure’s Carsland.  You also have the option of adding characters to your session, upon their availability.  Heck, yes!  I wanted to experience this for myself for a few reasons: 1). Who doesn’t like having paparazzi follow them around? 2) I wanted to check out the quality of the photography.  This could be hit or miss, but I was really happy with the result. 3) I wanted the park to myself to get the full experience.  And that’s exactly what I got.

Setting Up My Photo Shoot

The Day of My Photo Shoot

The communication from Photo Imaging was fantastic.  I was instructed to meet my photographer at 7:00 am at the turnstiles on the furthest left side of the entrance.  This is also where they have the list for people with early dining reservations.  My photographer was waiting for me and we immediately headed towards Toontown to begin our photoshoot.  I have to admit, I felt a little like a celebrity because I was allowed into places that the general population is not allowed to go.  Two photographers were assigned to the photo shoot, making me feel super special.  I am not completely comfortable in front of the camera lens and felt awkward at first, but the photographers put me at ease and it ended up being a lot of fun! 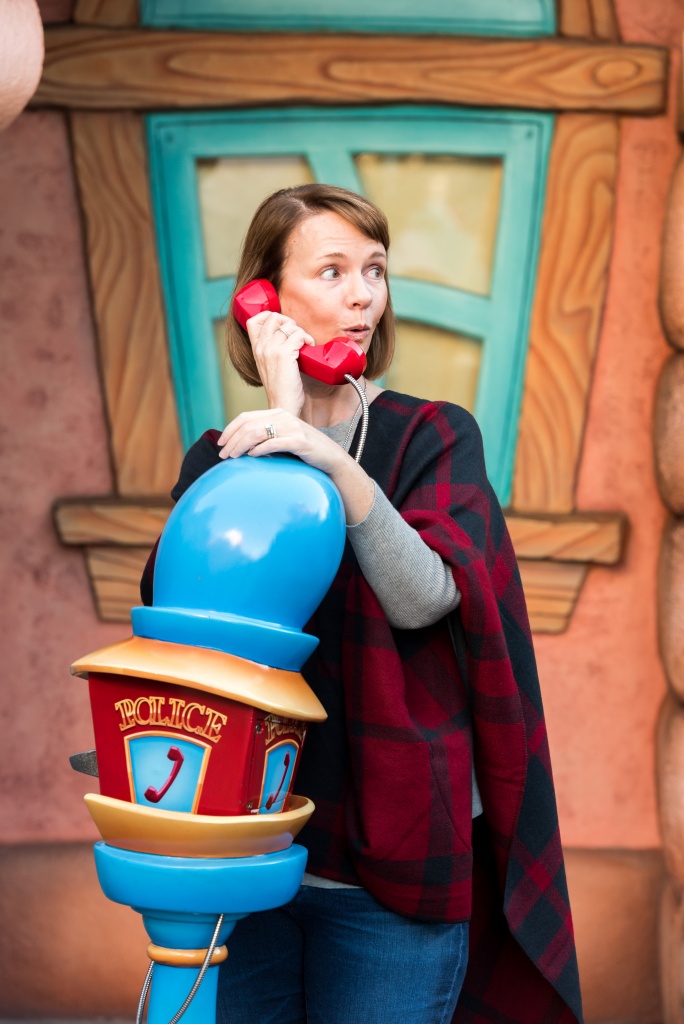 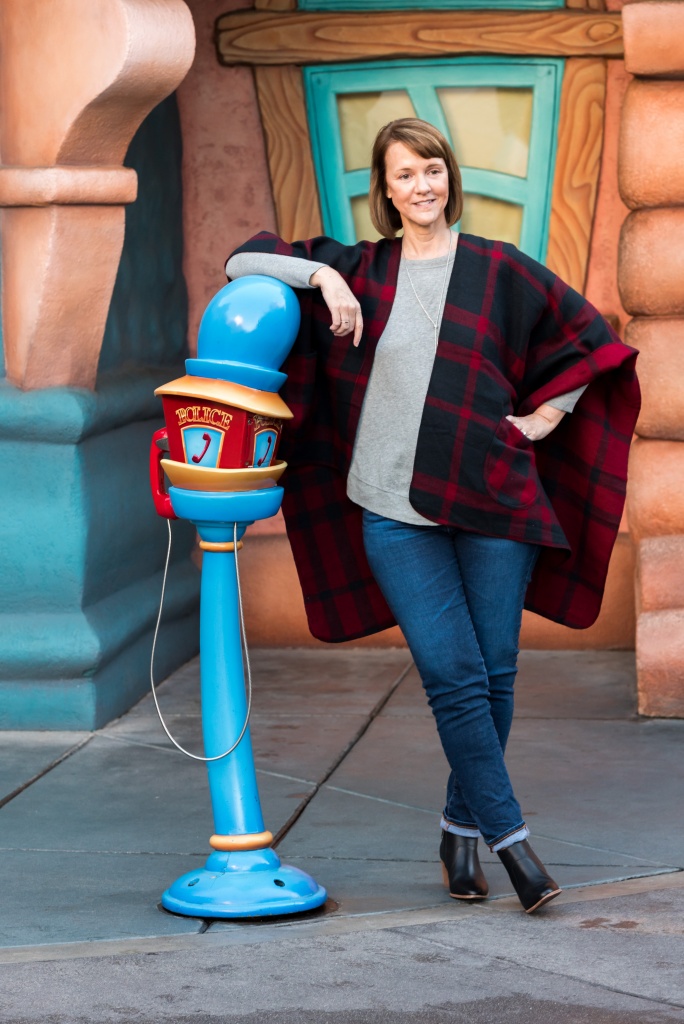 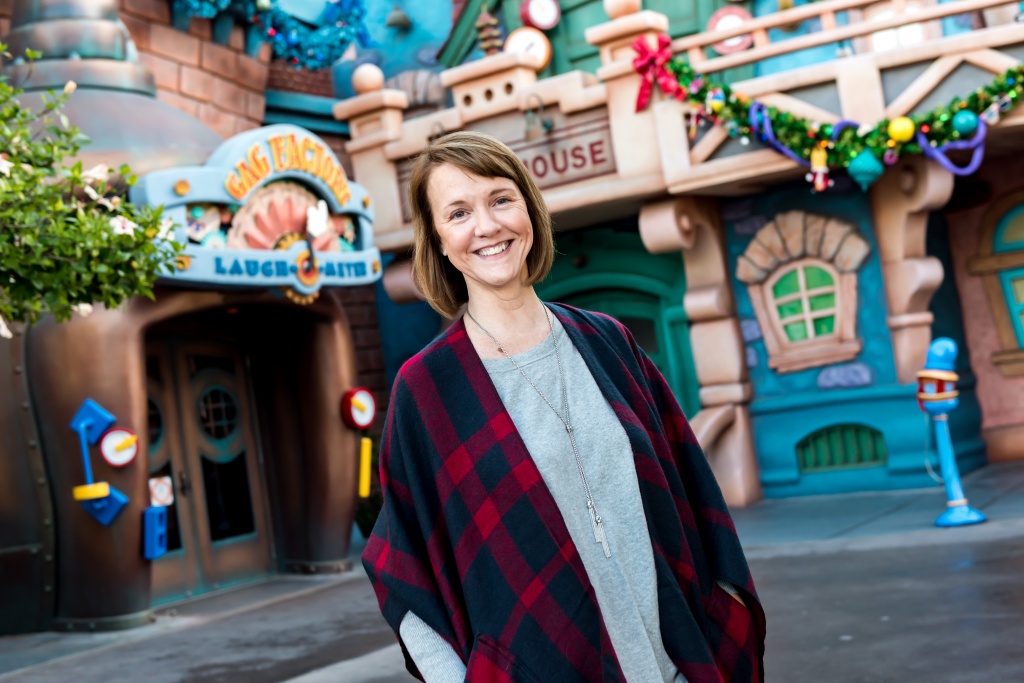 When I say that I had Toontown completely to myself, I am not exaggerating!  We had an hour for the shoot, and since it was just me, we were able to use many different locations throughout Toontown.  About 30 minutes into the photo shoot, Mickey shows up! Again, as a grown-ass woman, I thought it would feel strange to be doing this with a Disney character, but it was so fun!  Mickey was able to stay for 15 minutes, which was plenty of time to get some really fun shots throughout Toontown.  See for yourself: 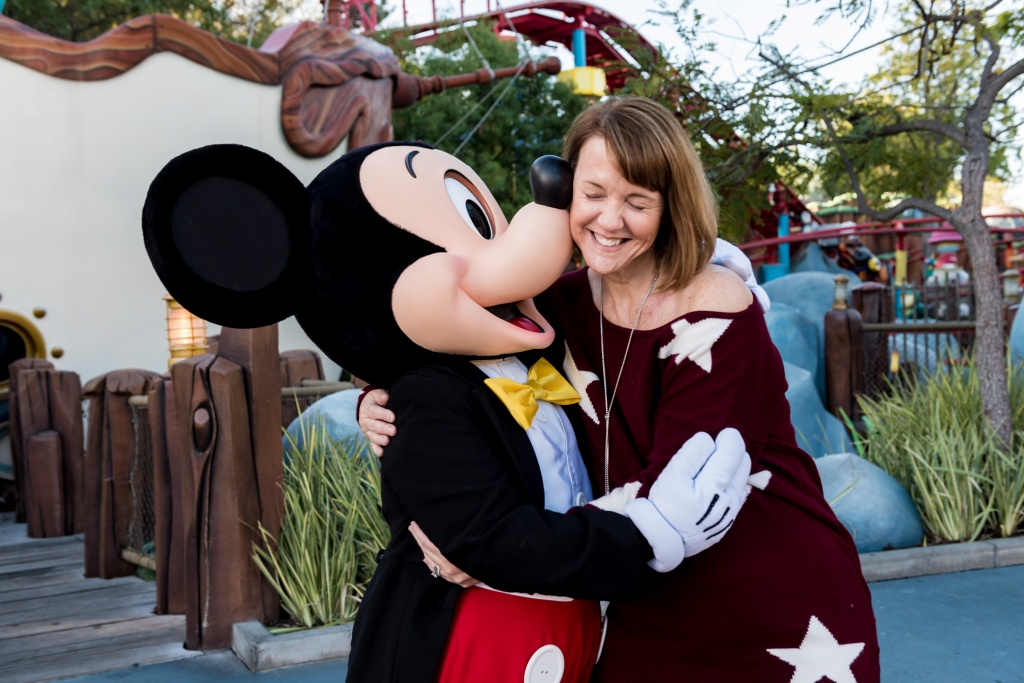 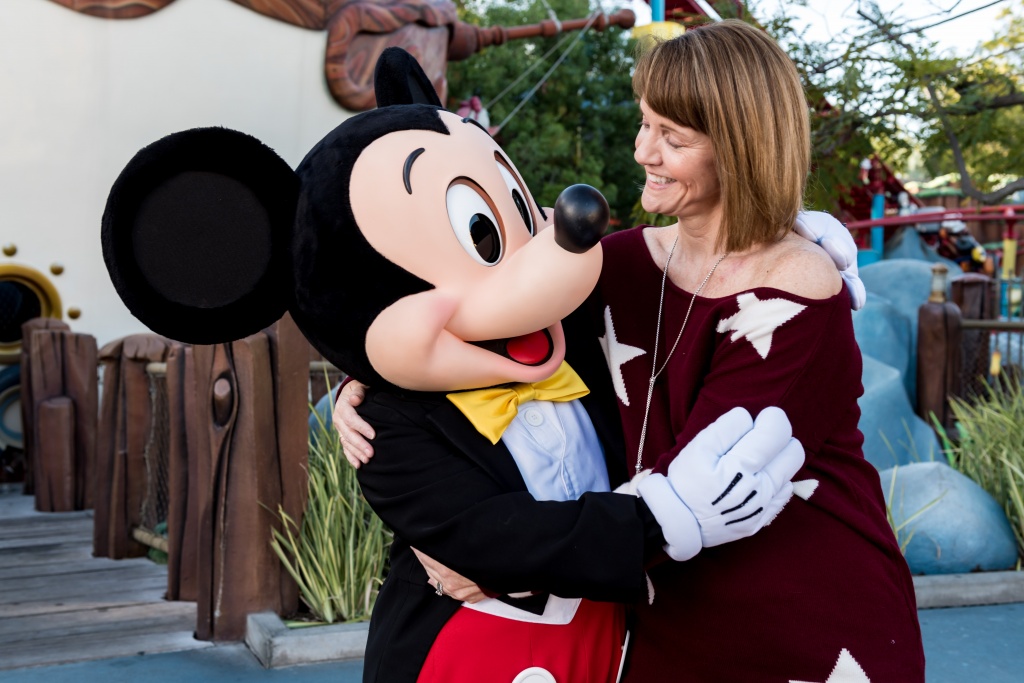 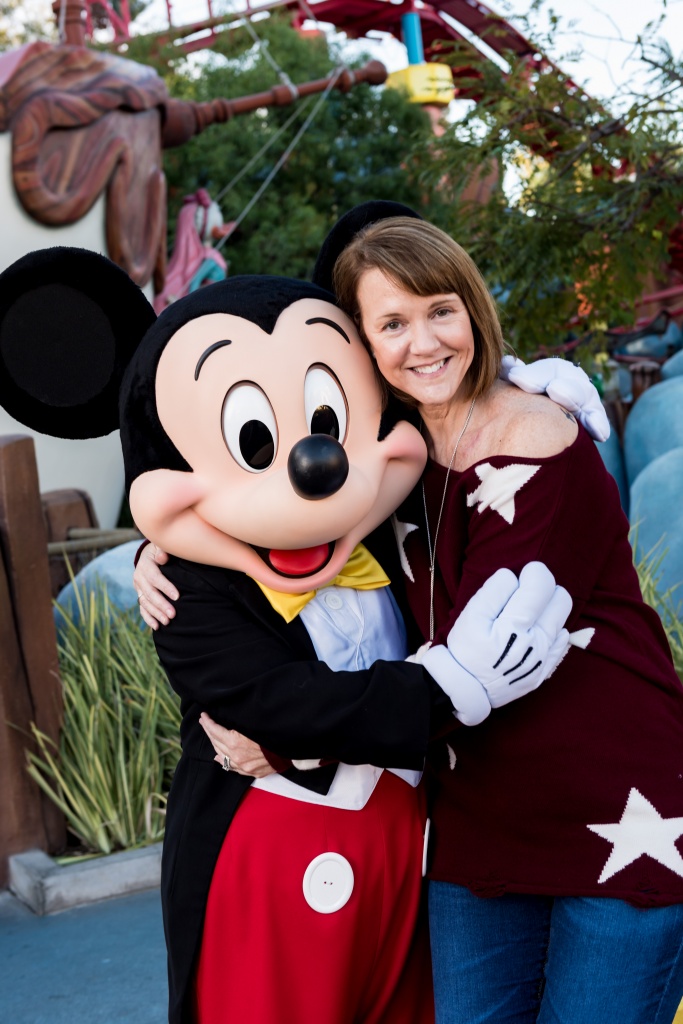 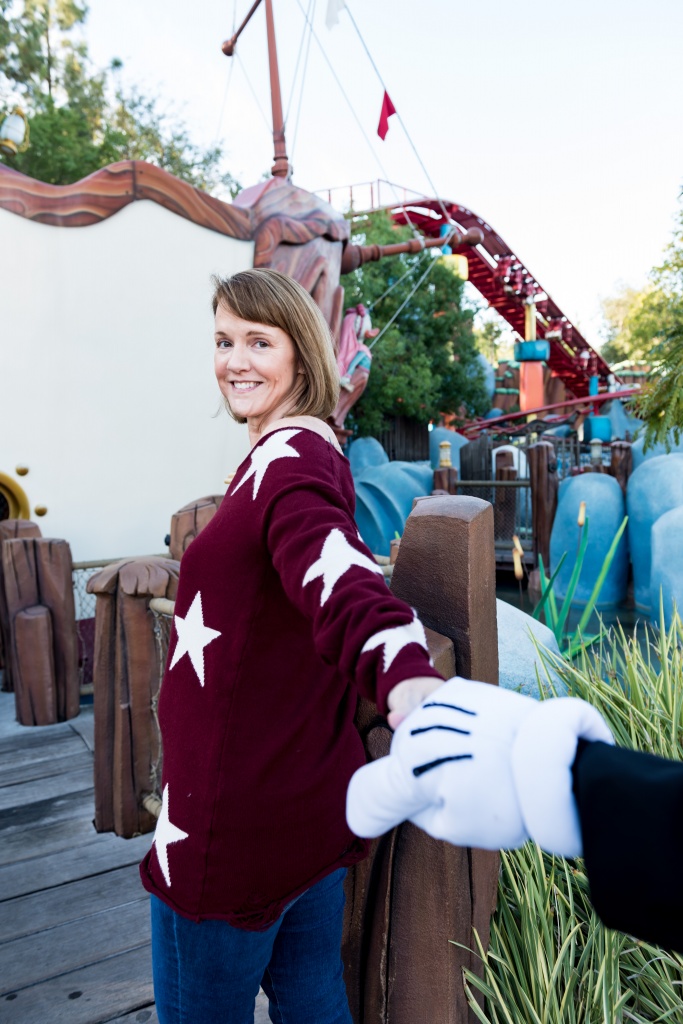 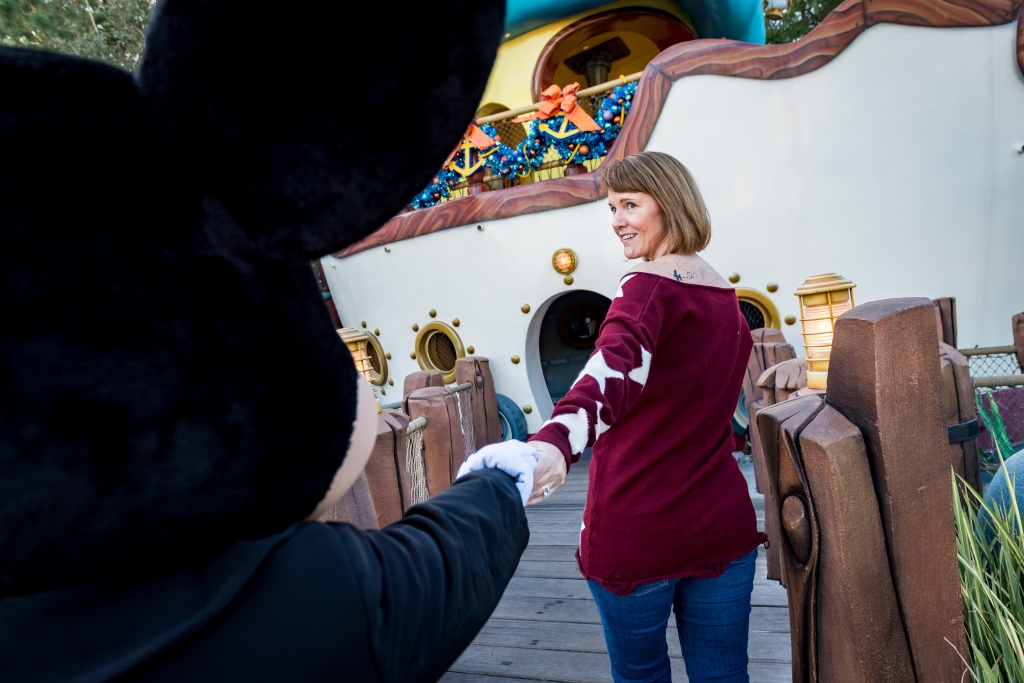 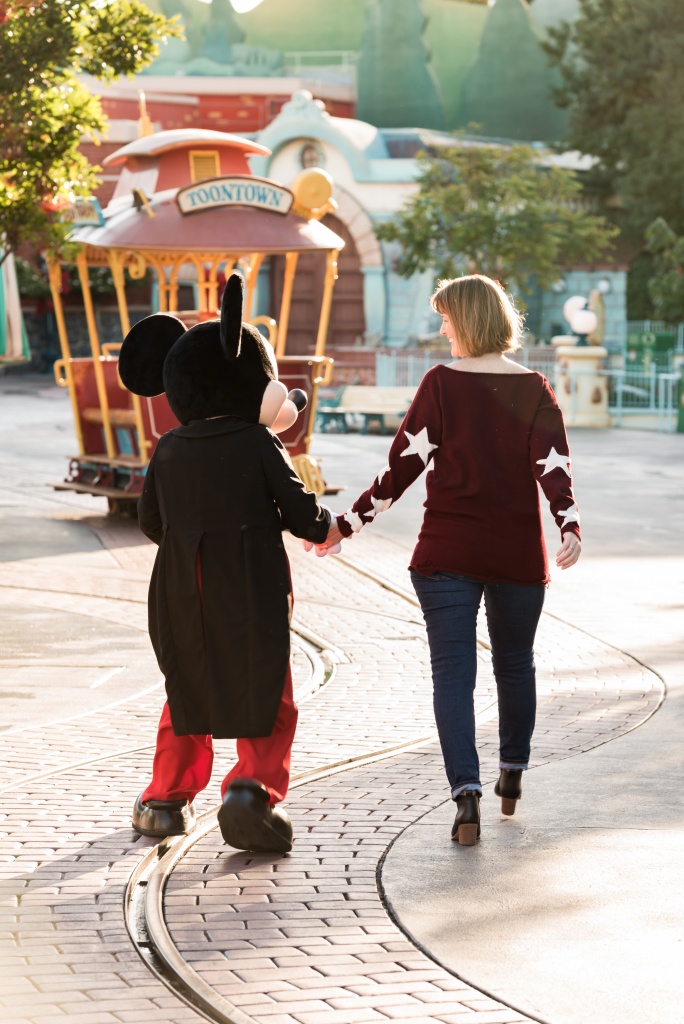 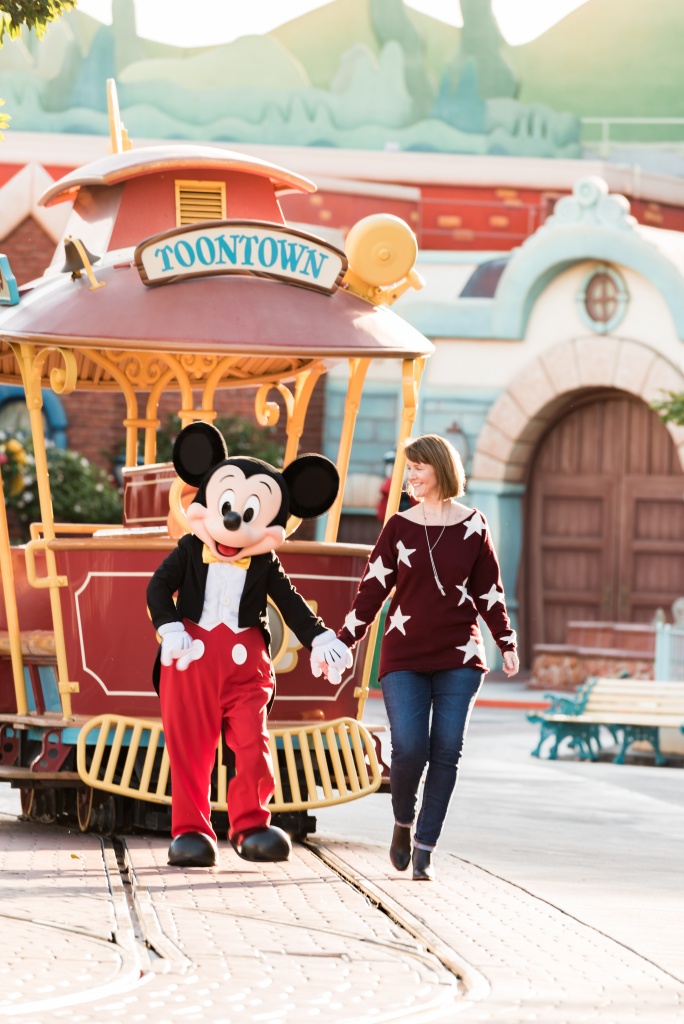 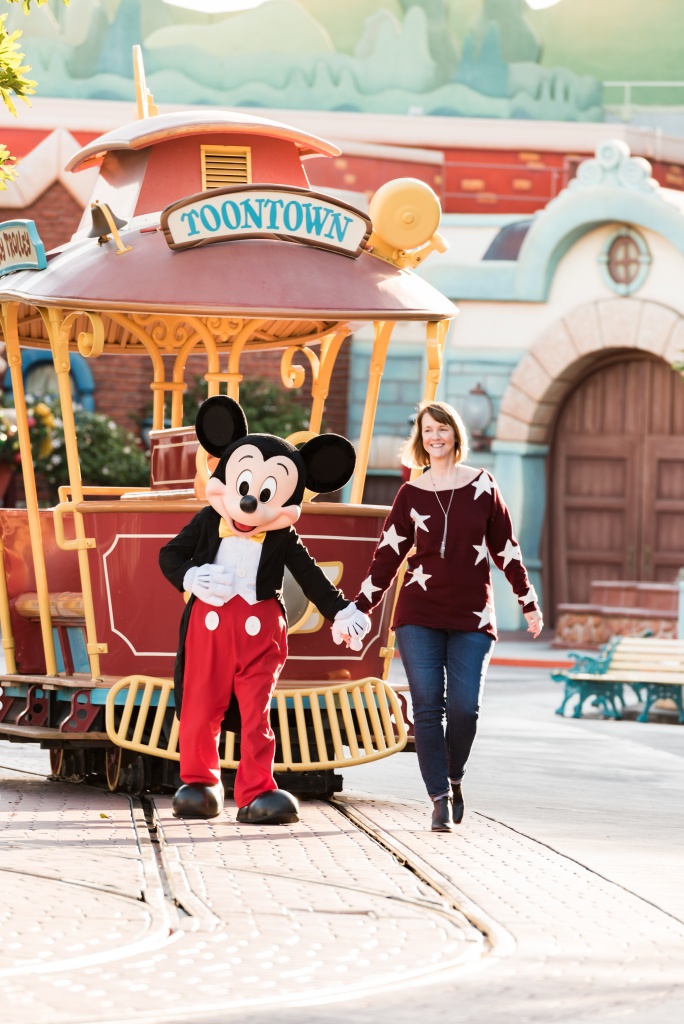 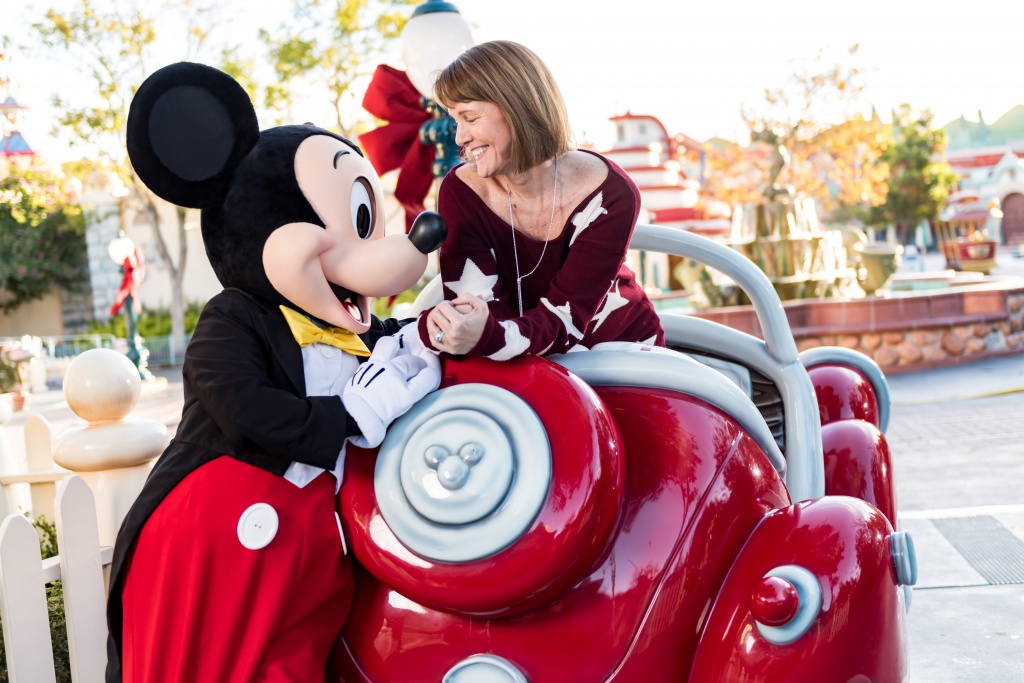 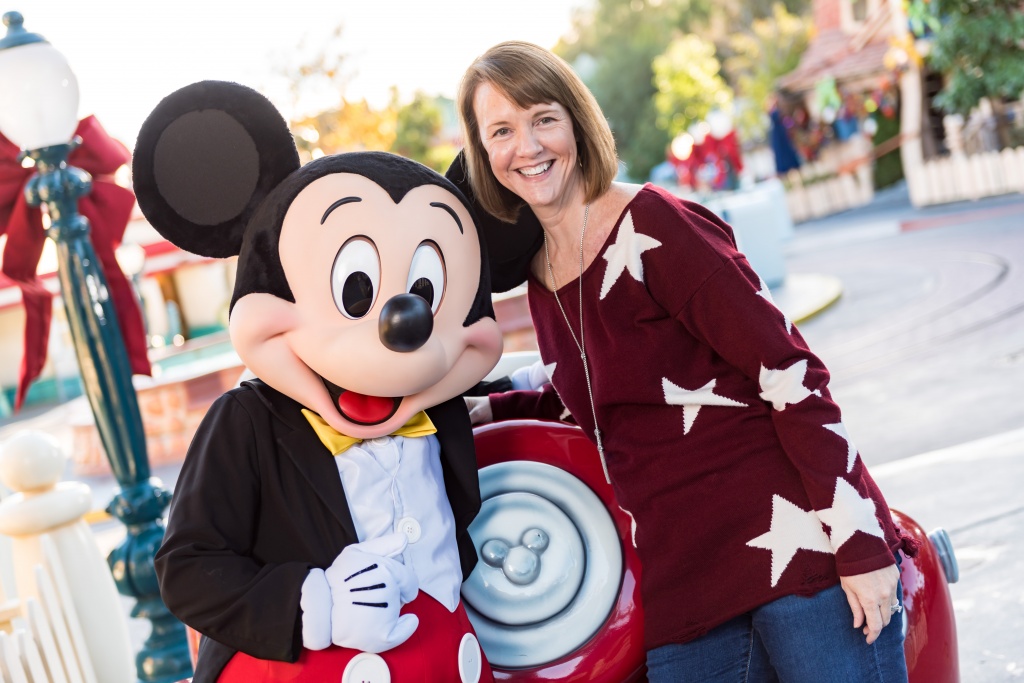 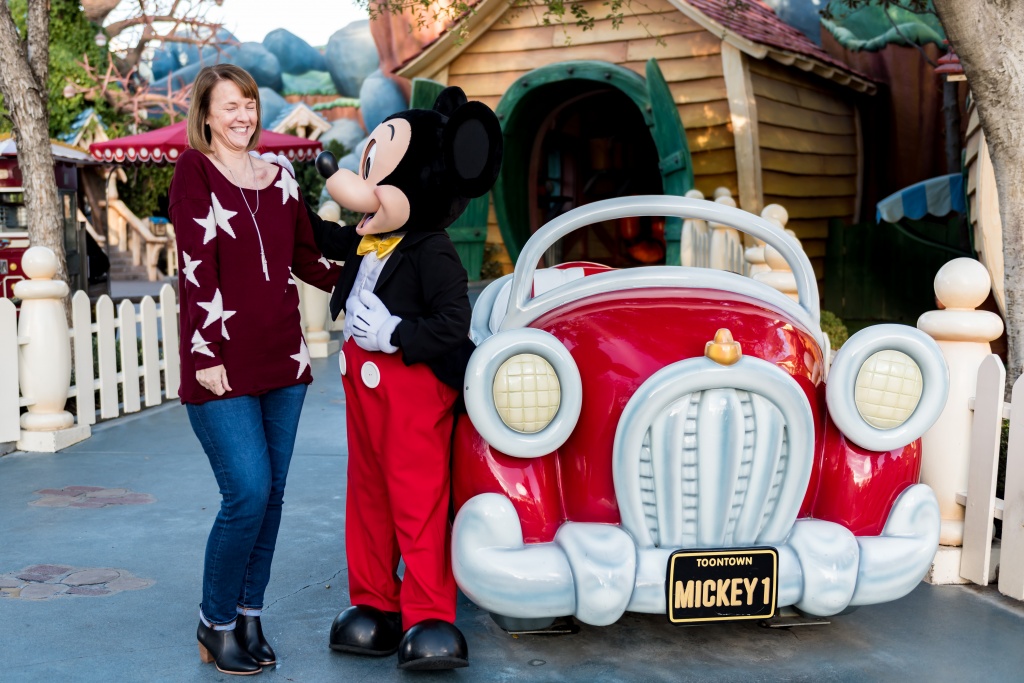 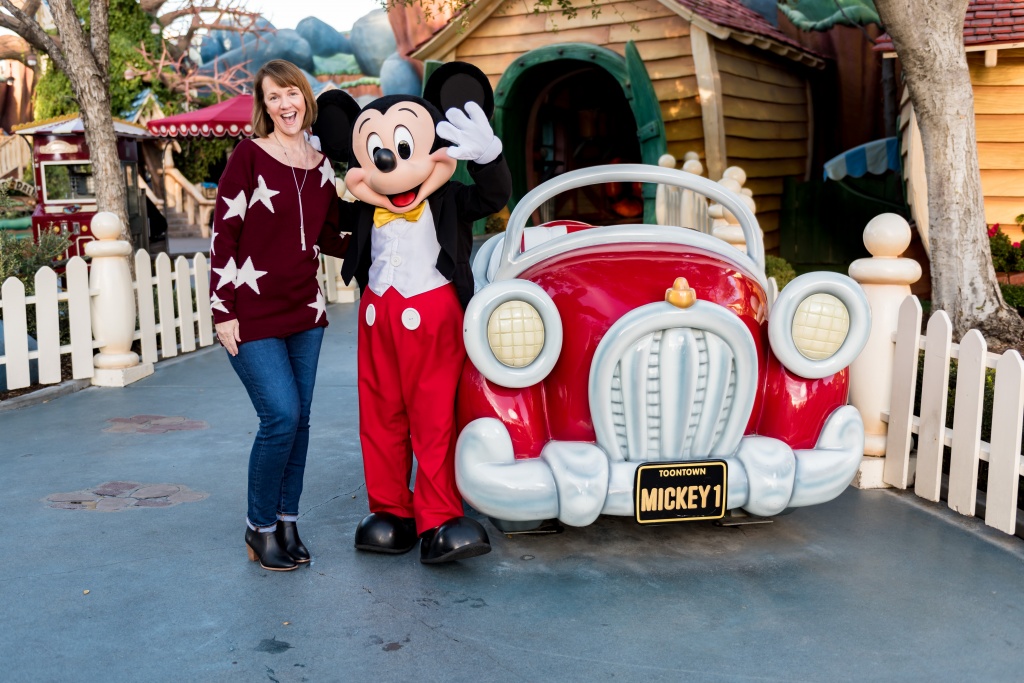 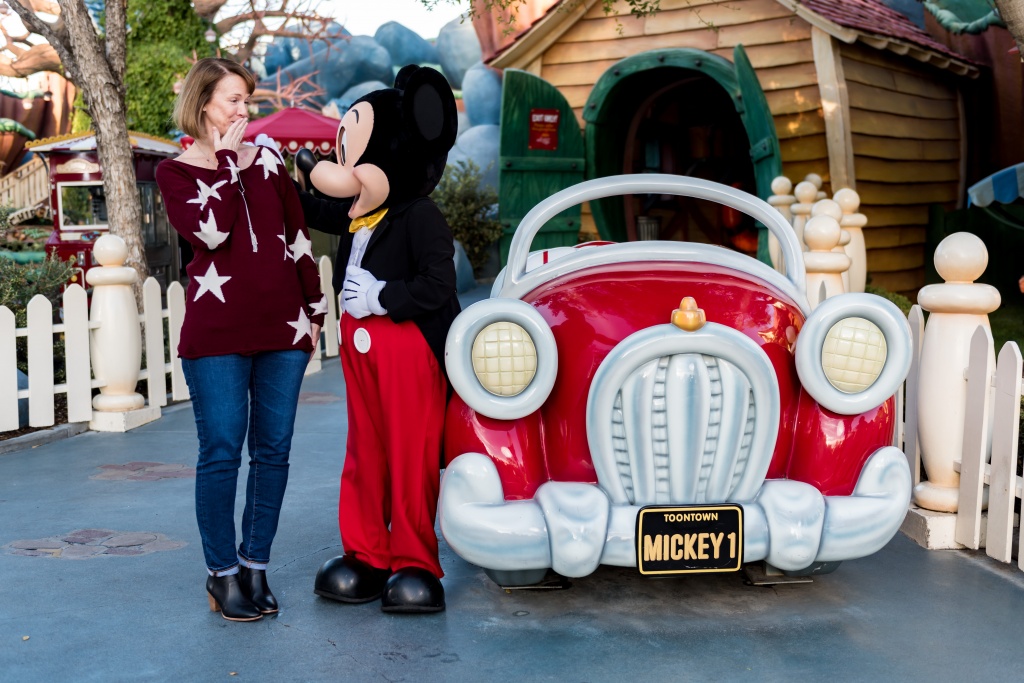 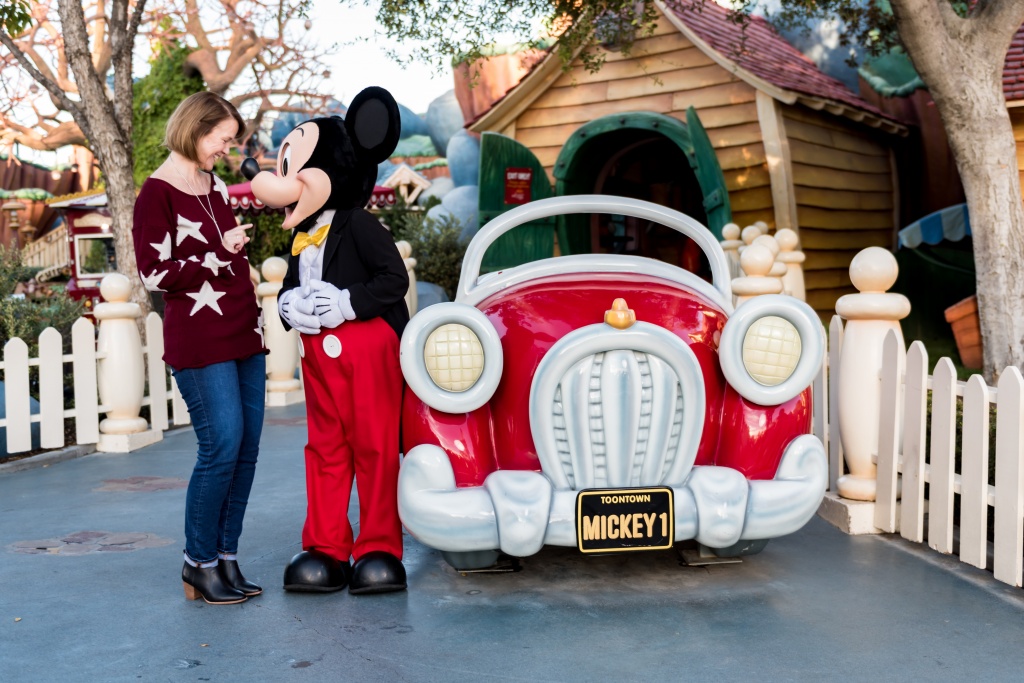 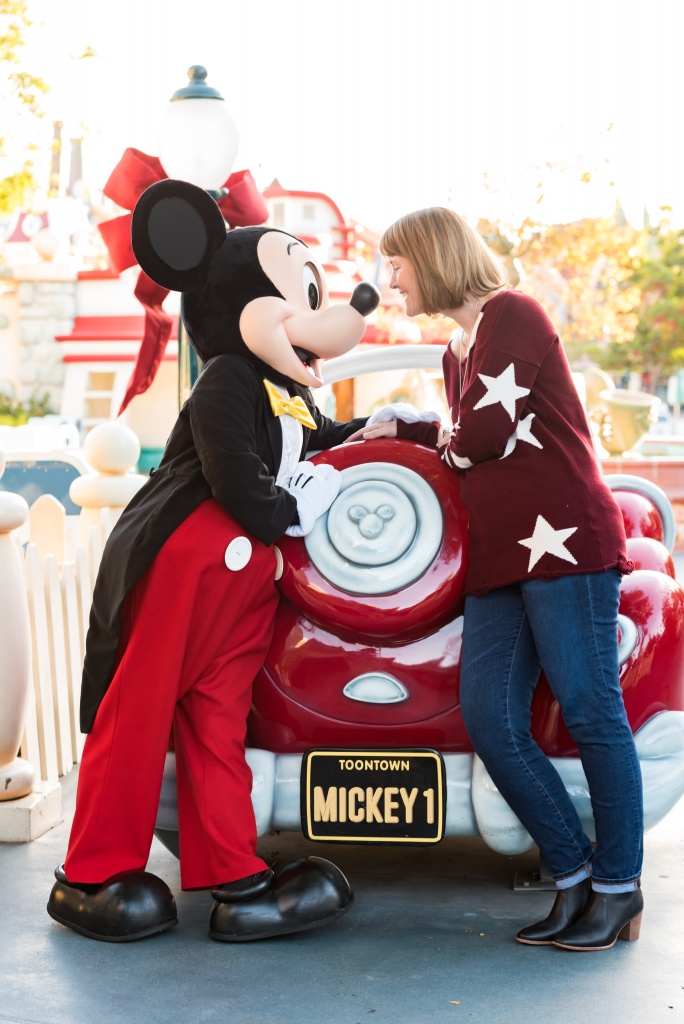 Overall, I had a wonderful time doing the Disneyland Signature Photo Experience.  I can totally see how valuable this would be for families who are trying to get those special shots, especially with multiple generations.  You are allowed up to eight people in a photo shoot.  Have you ever seen the families at Disney with Dad or Grandpa looking completely miserable waiting for someone to take the dang photo?  This would take that stress away.  Children would get some one-on-one time with a character (not always Mickey – I got lucky) and doing it first thing in the morning guarantees that clothes are mostly clean and naps aren’t needed.  I received a link to my pictures within TWO DAYS.  So freaking fast.

What do you think?  Is this something you would ever want to do?