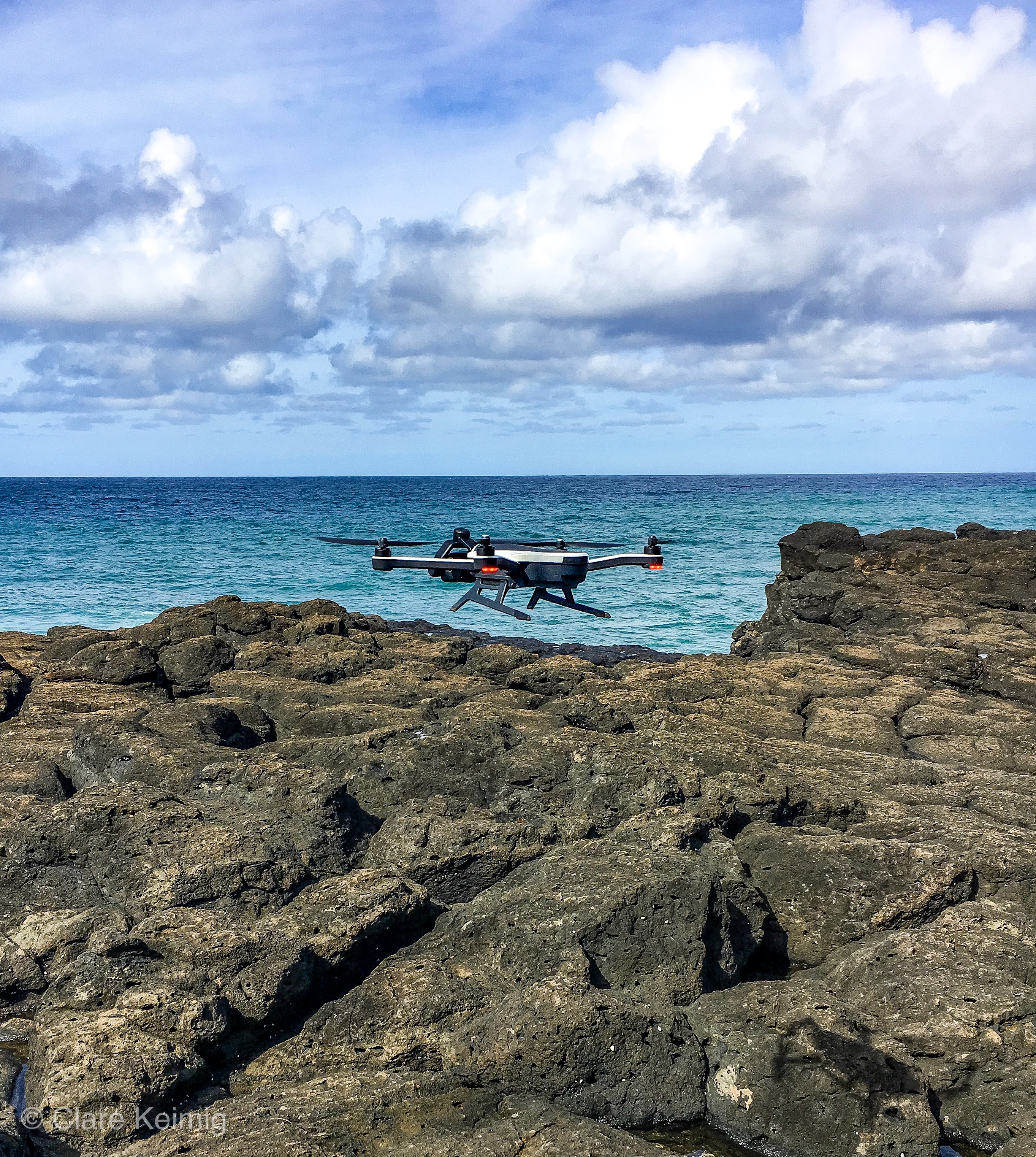 My husband and I hiked to Queen’s Bath while we were on Kauai for his birthday in November.  Kauai is a favorite vacation spot for us and we find ourselves returning time and time again.  It’s unlike other Hawaiian islands, as it is smaller and easier to drive around.  It is also not as commercialized as, say, Oahu.  While I enjoy going to Oahu for a day or two, I really don’t have a big need to do any shopping at places like Louis Vuitton or Cartier.

Our Day on The North Shore

The day began with rain all morning, which is not unusual on Kauai.  We had debated on whether or not to head to the North Shore that day because I planned to take my GoPro Karma drone out at Queen’s Bath.  This requires a downhill hike, then crossing over lava rock to reach it.  Going to Queen’s Bath at that time of the year is a little risky if you plan to swim, but we did not.  We just had to make it down that hill without breaking anything.  I’m talking legs, arms, drone….you get the point.

After checking the weather, it looked like it was going to clear in the afternoon.  It rained constantly on the drive from the south shore to the north shore.  The rain continued while we stopped for lunch in Hanalei.   It finally started to clear as we left lunch and headed towards Queen’s Bath.

If you have never gone to Queen’s Bath on Kauai, it is something to experience once in your life.  I have to admit, it’s a little strange to be going to this natural pool, which just happens to be located within a pretty upscale neighborhood.  There is a small parking lot at the beginning of the trailhead.  If the parking lot is full, do not try parking on the street.  Your car will be ticketed and your tire booted.  Just wait for someone to leave.  We waited for about five minutes.

Did I mention it rained?  Yeah, this is really important at this stage.  Normally we would have waited for a dryer day, but we were leaving Kauai the next day, so this was our only chance to take out the drone. To get down to Queen’s Bath, you have to hike down to it.  It normally takes about 15 minutes on a good day.  This day, we slipped and slid through thick, red mud.  That was until this woman, who I can only describe as ‘An Angel of Mercy’ offered me her walking stick as she passed me on the way up.  I have no idea who she was, but I wish her much love, Aloha, and any other positive karma I can throw her way.  My husband had my drone backpack and walked ahead of me to catch me before I plummeted to my death.  My walking stick and I just tried not to kill him.  The things I do for this blog!

Made it to the Bottom!

Even though we stopped sliding down the actual hill, we still had to cross the lava rock with red mud oozing out of our shoes. I was pretty sure slipping and cracking my head on lava rock would have hurt, so we still had to be careful.  We actually overshot our mark a bit when we heard some tourists, not locals, in a smaller pool trying to get themselves killed.  Standing there, I watched these full-grown men getting pummeled by waves coming over the edge of the pool and losing sight of their heads as they went under.  I just quickly made sure there were life-saving rings available and went back to the actual Queen’s Bath.  Hopefully, they survived.

It was still pretty windy after the weather blew through and I think my husband was having heart palpitations about flying in the wind.  I was more worried about finding a flat landing spot within the lava rock.  My drone flew with no problems and we got some great footage.  And I did break all four propellers upon landing when they hit the lava rock.  Worth it! 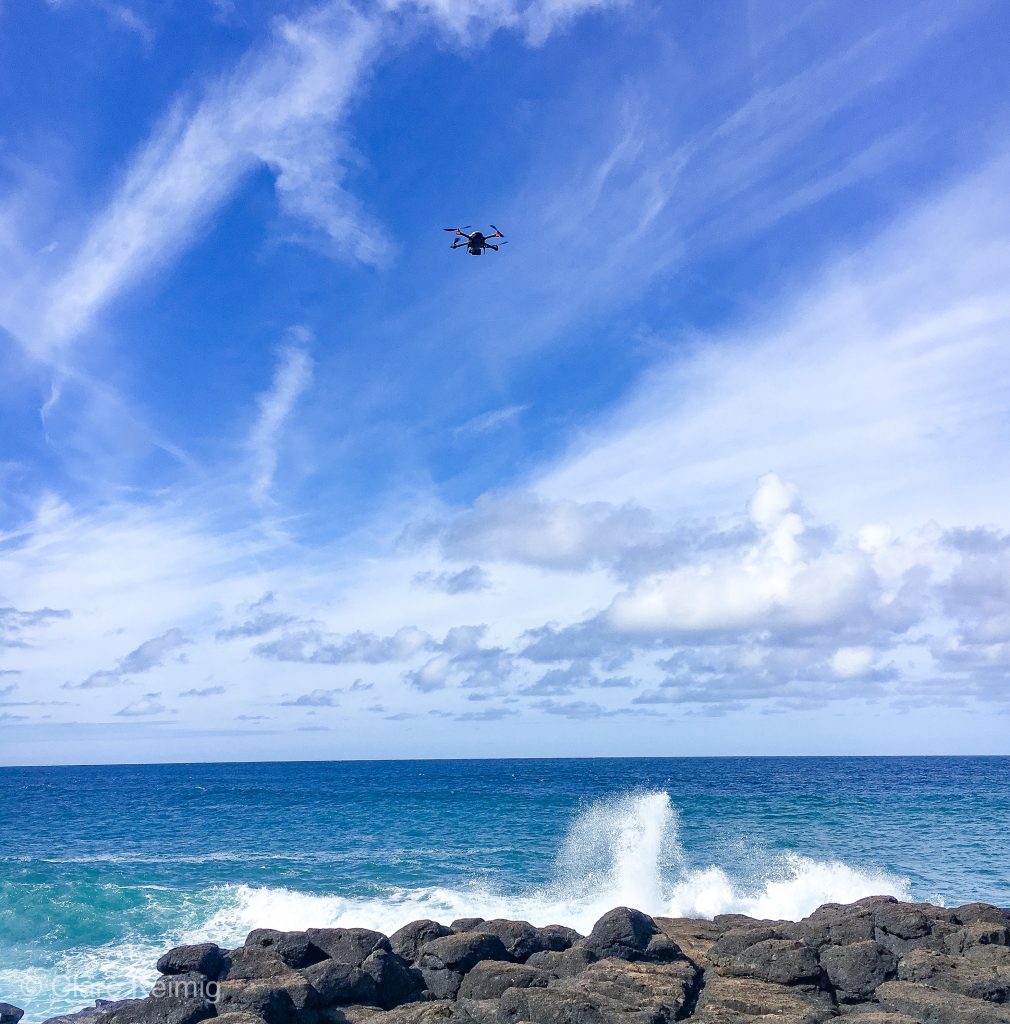 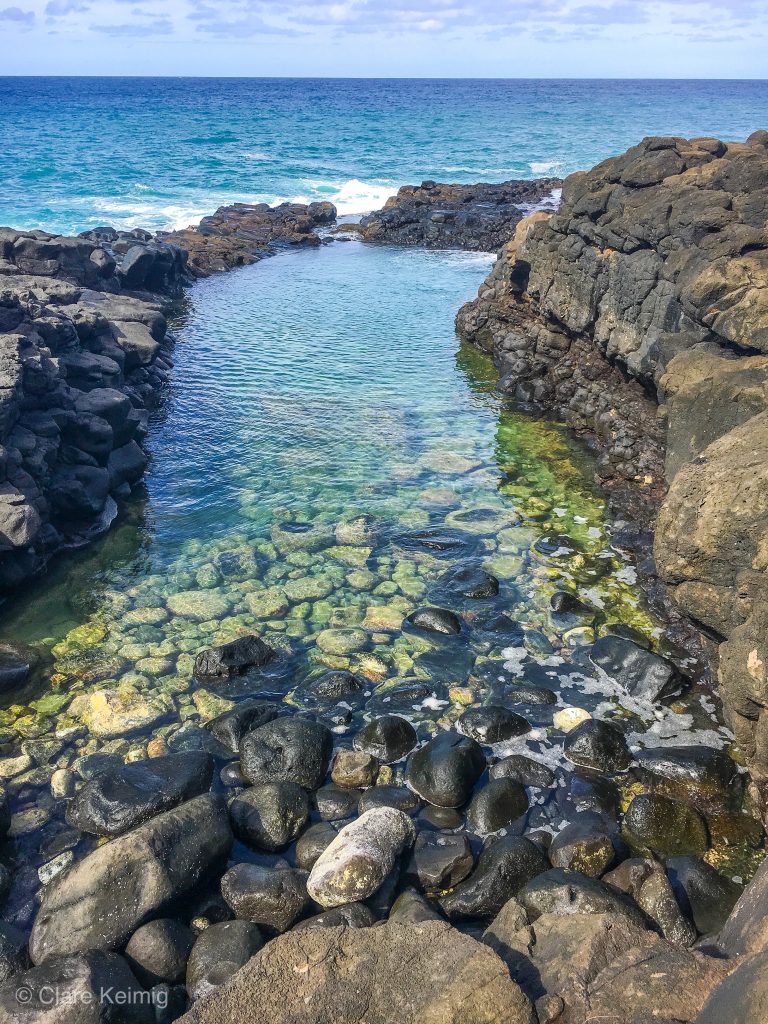 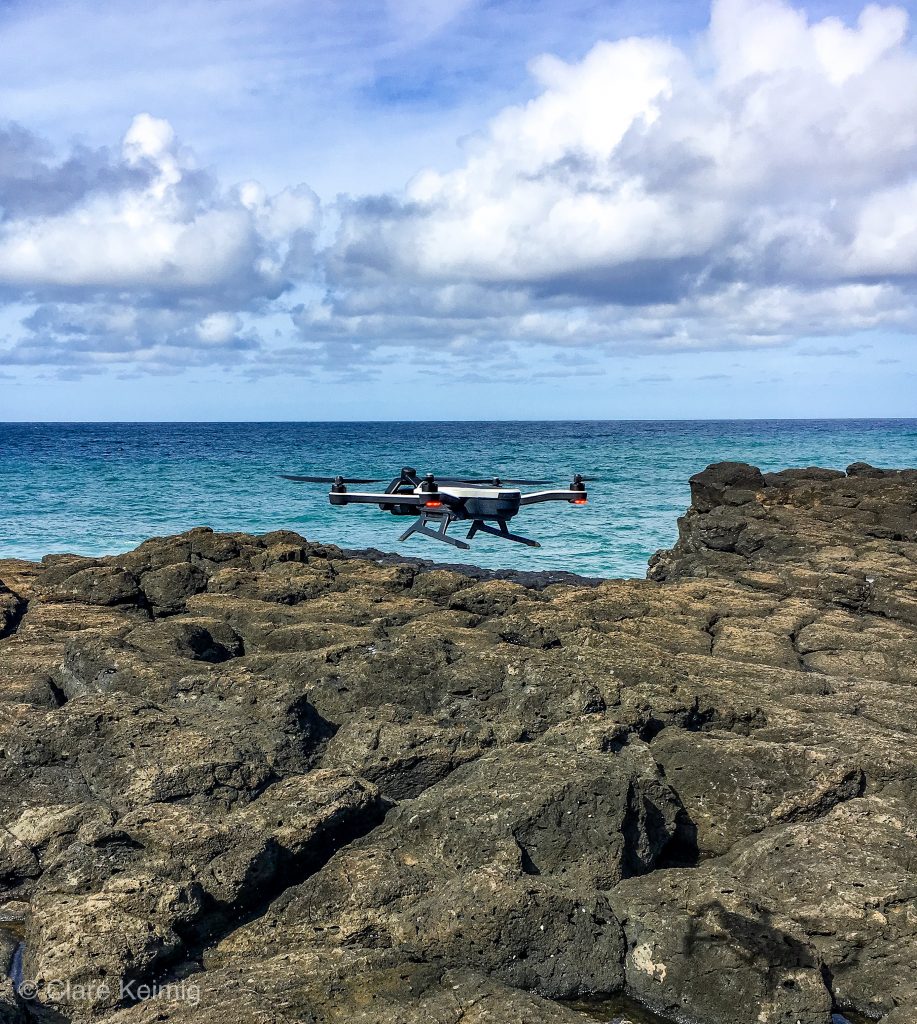 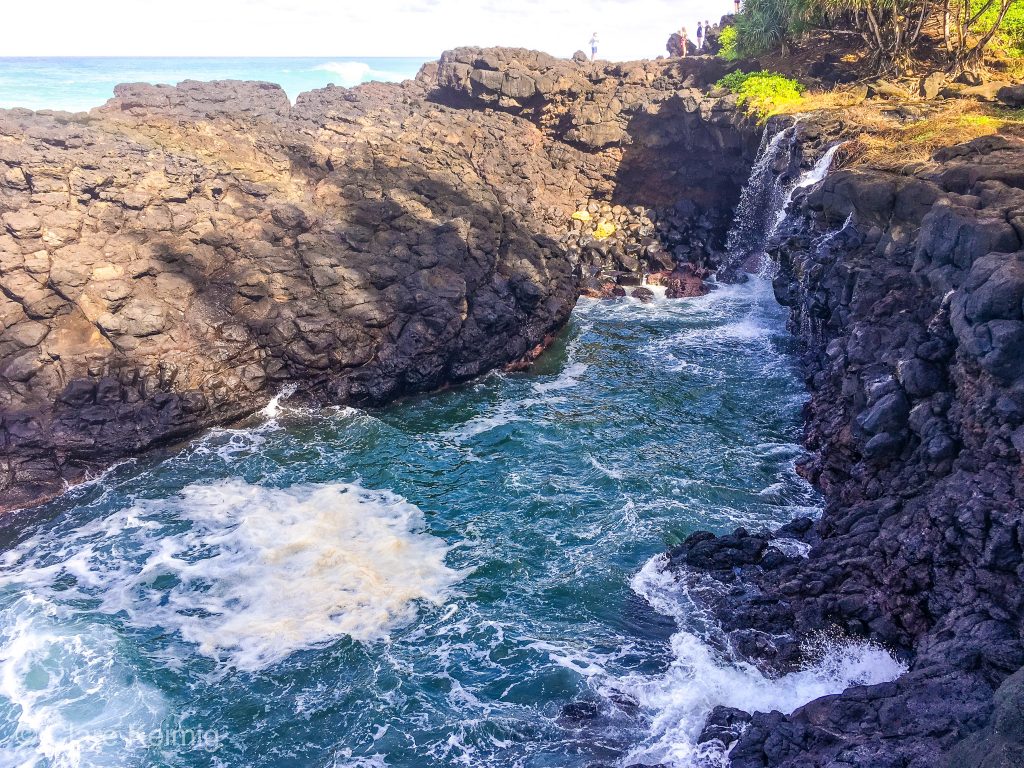 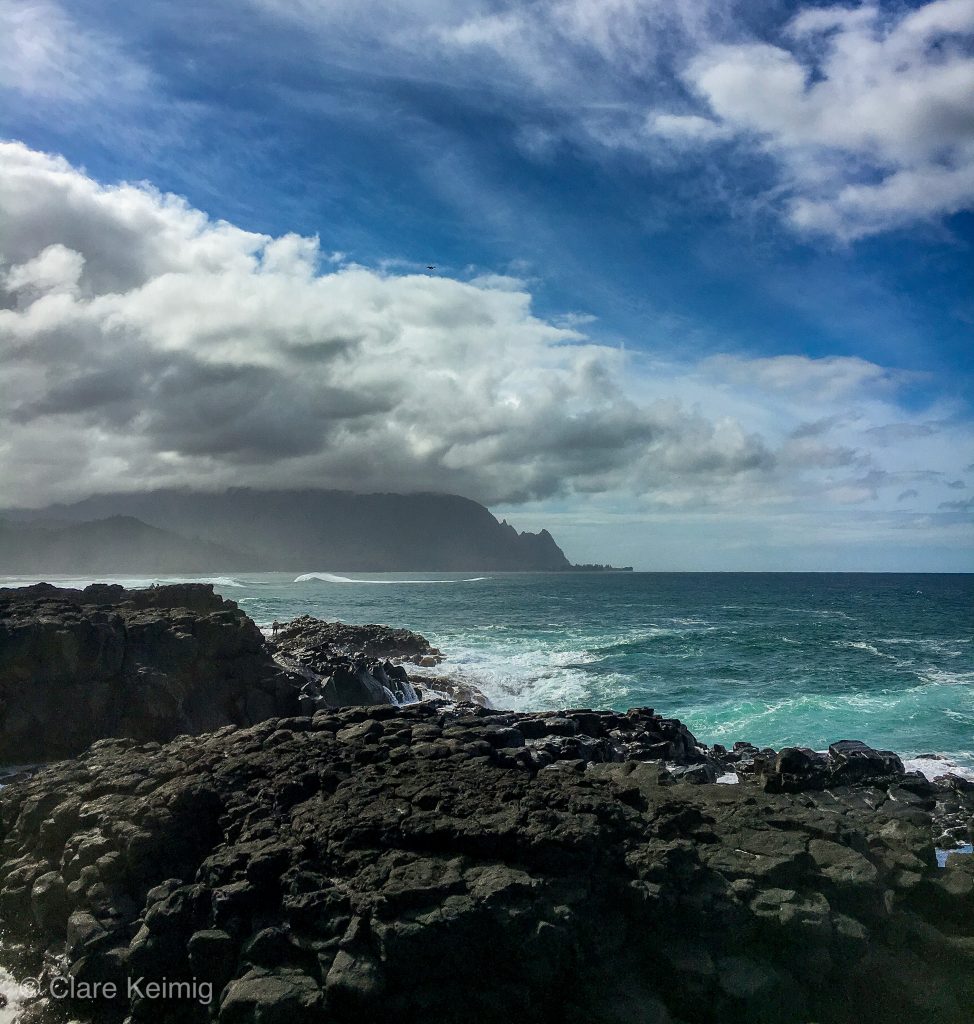 What goes down, must go up so that’s what we did. I think it was easier going up because I could kind of test my footing before committing to putting all my weight on a spot.  Going down, there were several spots that I thought were fine but then had my foot slide out from underneath me.  And yes, I passed off the magical walking stick to someone else as I neared the top.  Hopefully, she also threw some Aloha and good karma my way, too.

Take a look at my GoPro footage here: